Top to Bottom: Hogan, Akard, George, not sure who the sleeping SAW gunner is.

We had security shifts on the rooftop all night long. Everyone was up and ready to go by 0500. As the sun was rising, and we could see our surroundings, we started looking around the rooftop some. On the side of the building that Leo’s squad was on, we found some green boxes that looked like military equipment. We cracked them open and found some junk inside, but as we dug deeper we found a couple of gas masks and some combat boots.

We went downstairs to ask the man who had let us in, and he said that the boxes belonged to the owner of the building. We never found out any more about it. It wasn’t that big of a deal.

We stayed in place until about 9 A.M., when we were told to load up and move to the intersection of Routes Bravo and Florida. 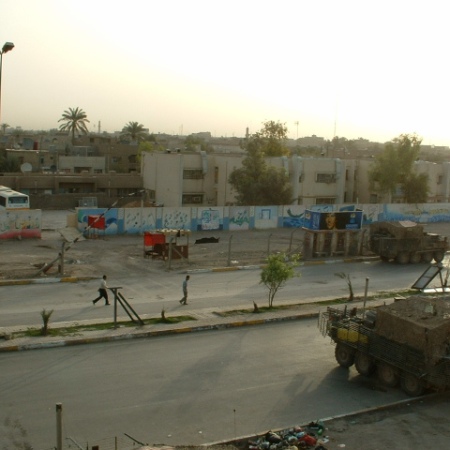 Strykers on Route Florida. Painted wall is around the Ministry of Education building, across from the apartment building we stayed on top of.

Leo resting with his helmet for a pillow.

2 Vic: If you look closely at the slat armor, you can see the panel with the which cable has pushed in. That’s from when Crapenter crashed into the building for us.

We rolled slowly, watching for IEDs, down Florida until we reached Route Bravo. As we started to make a left turn onto Route Bravo, we were told to hold in place. Our job was to sit at that intersection and make sure that there was not motor vehicle traffic. Curfew was in effect, and one of the restrictions was no motor vehicle traffic anywhere in that part of the city. We ended up dismounting most of the platoon and walking the area on foot.

Looks like Thin Mints and Gatorade for breakfast today. I wonder what happened to my fuzzy dice?

My 1st impression of Route Bravo is, it’s like nothing I’ve ever seen before. If you’ve seen Full Metal Jacket, when the Marines were walking into Hue City, it made me think of that scene. The streets and buildings are war-torn. The whole place just looks like a war zone. It is a war zone.

As we walked around, we started looking for another useful rooftop, and we ended up back at the Ministry of Education building. We found stairs to the rooftop, so my squad went up. Leos’ squad stayed inside, making sure no one came up through the building and surprised us.

We stayed there for the rest of the day. It was frustrating. We kept seeing Iraqis walking toward us from where the bulk of the fighting was happening. They were bloodied and often limping, but they were unarmed and waving white flags. We had to just let them pass, even though we knew where they were coming from. While we sat, we could see black smoke rolling from several blocks away. It turns out that Bravo 3-1 and Bravo 3-4 had both taken IEDs. 3-4 made it back to the JSS, but 3-1 had been towed as far as Florida before catching on fire. I guess it was some sort of Iranian made EFP. Apparently these things are able to penetrate our armor easily.

NOTE: I have already mentioned these IEDs. There was some confusion on the date. It appears that 30 March is the correct date.

It seemed like the Stryker burned for hours. From what I understand, the VC had some fractured ribs, and the driver had some burns on his hands and face. I’m just glad they got out. Rounds started cooking off inside the vehicle, and eventually some HMMWVs showed up, escorting Iraqi fire trucks.

I do love kicking doors.

Before dark, we went back through the building and cleared some of the offices we had been in the night before. We picked a few offices to sleep in, and we scrounged around for furniture to sleep on. Several of the offices had sofas, so we grabbed several and consolidated them in part of the building.

We even figured out how to get the generator running, so we had electricity that night.

Can’t beat that in these conditions. 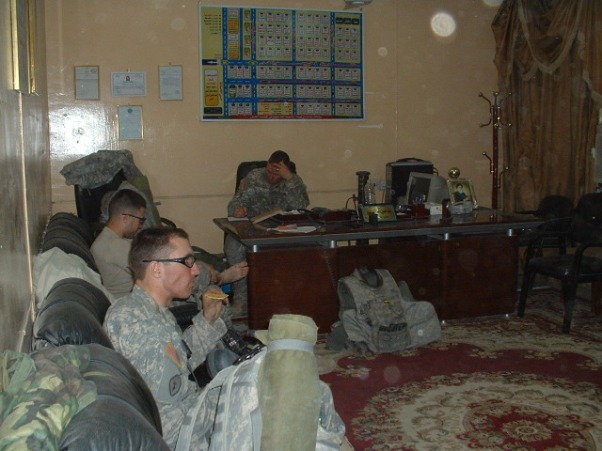 L to R: Caballero and Juice