Today we moved north on Route Cobra with a large element. We were escorting the charlie and headquarters company commanders, and we had MiTT (Military Transition Team) and a lot of Iraqi Army vehicles mixed in with us. The MiTT teams are the soldiers and law enforcement officers who are working alongside local military and law enforcement officials to help train them and prepare to assume responsibility for a particular area. 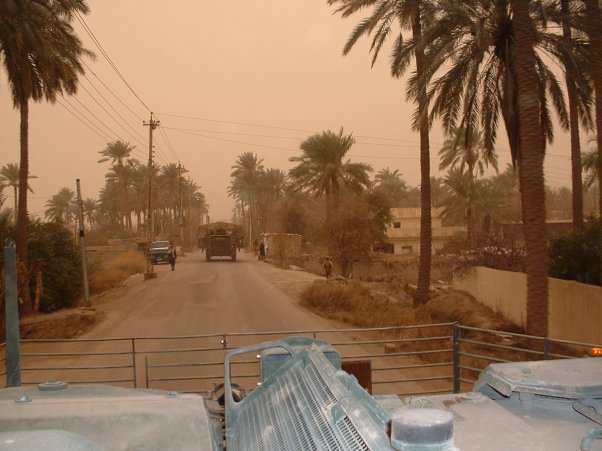 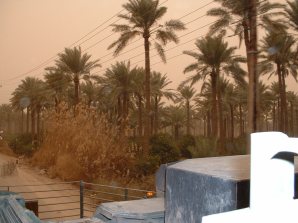 We stopped a couple miles short of JSS Tarmiyah, and we were told that higher wanted us to send three Strykers back to Camp Taji to meet up with some HEMTTs (Pronounced Hem its – Heavy Expanded Mobility Tactical Truck). 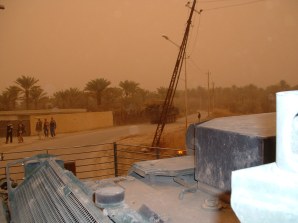 AB kind of flipped out. Air was red because of weather, so we had no support from air weapons teams or medevac birds. He argued that they wanted us to split our platoon’s patrol, when there was no air, and only one medic assigned to the platoon. He usually doesn’t get too fired up, but he came over the radio and said, “There’s a reason I’m the fucking platoon sergeant…” 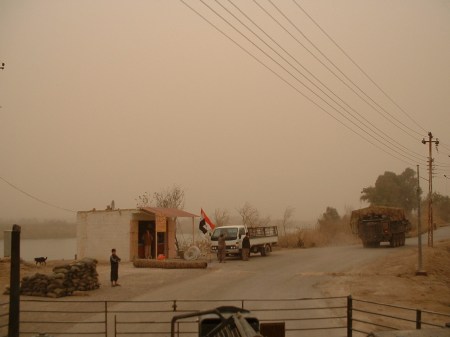 Despite his logical protests, they sent him and a section back to Camp Taji anyway. I continued on with the platoon and the rest of our gaggle.

It was around 0830 when we arrived at JSS Tarmiyah, and we were told that we could hang out. Some of the soldiers went inside while others hung out around the vehicles. I went inside to look around and even managed grab some breakfast. Lloyd wasn’t far behind me, but when he tried to get food, LT Ives said, “Hey, chow is for alpha company soldiers only. Get out!”

Funny, we had to miss breakfast so that we could escort commanders and supplies up here, but they want to get all shitty when we try to get some chow. Also, I’d be willing to bet that the HEMTTs that AB is bringing up here now is their next shipment of food and supplies.

I got a chance to say hello to my buddy Phil. He and I were both in Operation Anaconda in March 2002 in Afghanistan, but we were in different units. In 2004, we were both assigned to 2-35 Infantry in 3rd Brigade, 25th ID. We were both on rear detachment for awhile, and then we were in the same platoon in Afghanistan in 2004-2005. We used to drink beer and play golf together. Now we are both in 1-14, but we are in different companies. I haven’t seen him for awhile, so it was nice to catch up a bit.

I decided to walk back to my Stryker when CSM Ordonio and 1SG Mapu started using our soldiers to figure out where to have a formation for a combat patch ceremony. They had them line up so that they could get an idea of spacing, and how much room was available. I got my 10th Mountain combat patch in 2002, and I got to option to wear a 25th ID combat patch in 2005. I don’t think it really requires a ceremony, but whatever.

Around 1 P.M. we were told that they needed a squad to move to the Iraqi police station, just outside of the JSS, and secure the building. Apparently, A Co. uses it as a meeting place pretty regularly.

I was a little pissed because SPC Howard, our company commander’s gunner came and told SPC Almazan that my squad needed to go. Since when do orders move up the chain instead of down?

We started heading that direction, and the battalion commander came around and told us to hurry up. I guess we needed to run. When we got there, the commanders were all leaving, except for CPT Veath.

He was having a private meeting with some local leaders, so he took us into an office with an adjoining room. His meeting was in the next room, while we sat staring at each other in the office. Our job was to keep anyone from entering the meeting room. 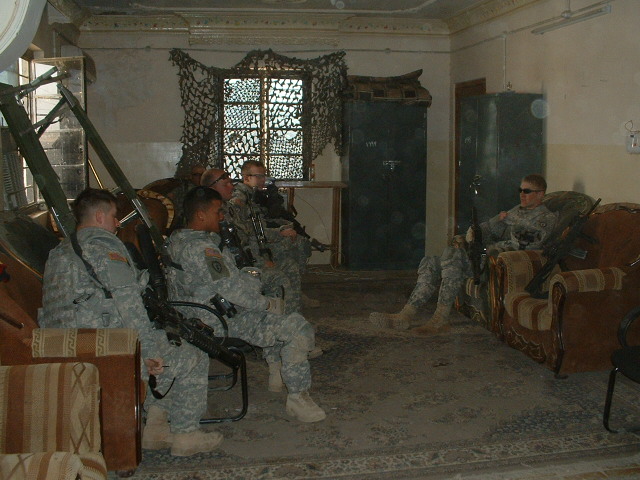 George went out with some of the Iraqi policemen to get some food for himself, and he asked if any of us wanted some. A few of us had falafel for lunch when he got back. I have had local food in a lot of places, but this was definitely different. It was a piece of flat bread that is pulled open into a pocket, then stuffed with lettuce, tomatoes, maybe some cabbage, and green onions. There was also the falafel, of course, which is a kind of deep fried chickpea stuff. It actually reminds me of hushpuppies. There was also a kind of yellow sauce that was really tangy and very strong. It seemed very familiar to me, but I couldn’t place it. I kept thinking that something about it reminded me of when I was a kid and lived next door to my grandmother.

Later, I asked, “George, what was that yellow sauce?”

“The juice, from uh, how do you say…pick, pickles,” he said.

It made perfect sense then! It tasted almost exactly like my grandmother’s homemade bread and butter pickles. It was homemade pickle juice drizzled over the top of the vegetables.

Colonel Halal, another Iraqi leader, came into the room and asked us to inform CPT Veath that he was downstairs. LT Schardt stuck his head into the meeting to pass the message, and he was quickly shooed out.

CPT Veath finally came out of his meeting, and I again reminded him that “Colonel” Halal was downstairs.

I told him, “sir, you need to tell him to go fuck himself.”

None of us trust that guy anyway.

Captain Veath went down stairs and talked with him for just a few minutes, and we left. It was about 4:30 P.M. when we finally rolled out of JSS Tarmiyah, where the army chow is only for A Co. soldiers.

5 minutes outside of the gate, we had to stop. There was a northbound convoy, and the route is too narrow for us to pass each other. Once they had passed, we continued on our way.

I was glad that we didn’t wait any longer, as the fog and the dust were growing thicker, and visibility was getting very low. The sky was a yellow-brown color, and by the time we reached Taji, I could hardly see the road in front of our Stryker from standing in my hatch.

Taaga and I did our usual, throwing candy and stuff to kids as we passed through. AB’s part of the patrol never did come back up. I guess he went and told the 1SG that sending soldiers out without a medic and air support was really messed up.