At 3:30 A.M. we were told to get up and get accountability for all weapons and personnel. After checking on the guys and reporting that we were good to go, we went back to bed.

About 30 minutes later there was another loud knock on our door. “Get everyone up and report to the company HQ for formation,” we were told.

By this point, I was tired and getting real pissed. I bitched and complained the entire way to our company headquarters, which wasn’t far, but it also wasn’t right next door either. 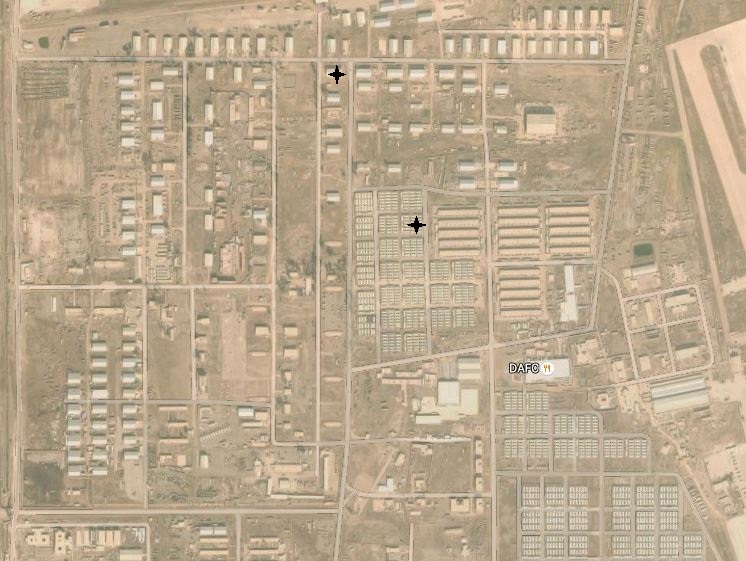 Our CHUs (Containerized Housing Units) were in the cluster of buildings/containers near the center of the photo. Our Company CP was the marked building near the top of the photo.

When we arrived at the formation area, a mud and gravel parking lot in front of our company, we were told that all patrols for the day had been cancelled. 1SG Angulo called all of the platoon sergeants forward and told them that get us all into a room upstairs above the company CP. Once we were crammed into that room, we were told to that no one was allowed to leave, and that we would not be leaving anytime soon.

Several guys stretched out on the floor to go to sleep, but the room was really crowded. It was not large enough for everyone to lie or even sit down on the floor. It was filthy anyway. Dust is thick there and settles all over everything. Plus, we had just tracked in a bunch of mud from the parking lot. There were big clumps of mud all over the floor from our shoes. Some of the guys started setting up benches that had been folded up along the walls. I grabbed a cot that was folded up in the corner and set it up. I didn’t stretch it out completely with the metal braces that go on the end. Instead, I laid one of those bars across the center and placed my gloves on it for padding. So, I sat on the end of the cot with my feet on the floor, and I laid back with my head at about the middle of the cot. Someone else used the other side. It wasn’t comfortable, but it was better than nothing.

It seemed like forever before CSM Ordonio finally came in to talk to us. He asked us if we knew who had been shot.

He went on to tell us that 1LT Iorio, our battalion S-4, had been grazed on his side, and the bullet had shattered a bone in his forearm. He paused for effect, and then told us that he didn’t believe it was the result of a negligent discharge. He even told us that there were four officers from our battalion who were unaccounted for. Then he said, “No one can leave this room until the investigation is complete. “That could take a few hours or all day,” he said.

While we sat there waiting, I listened to two soldiers arguing. A specialist was just going off on a private, berating him, and just being a real dick. The private asked him, “Why do you feel like you need to talk to me that way, specialist?”

They kept at it, and I had finally had enough. “Who the fuck is your squad leader,” I asked.

They both snapped to parade rest and told me his name, which I won’t mention here. That seems about right, I thought. I had worked with the guy before, and he was a real dick. He was a cocky ass who treated his soldiers like shit, and never understood why they hated him. His junior leaders followed his example. They were always smart asses, and they never learned how to take care of “Joe.”

Around 8:30 A.M., we were told that we were free to leave the room, but there were some new requirements. Instead of traveling in buddy teams (2 guys), we were told that we had to travel in fire team-sized groups (4 guys), and that each group must have an NCO with them. Now, if I wanted to go anywhere, aside from our living area and the bathrooms in our living area, I had to find three other soldiers to go with me. Perfect.

No one seems to know a whole lot about what happened. We got several pieces of several stories, and of course JNN, (Joe News Network) ran with the stories, and they spread like wild fire.

Around 3:30 A.M., there was a knock at LT Iorio’s door. As he opened the door to find out what was going on, someone shot him, dropped the weapon, and ran away. The weapon, supposedly belonged to our battalion S-3, a major, and had been missing for a couple of days from the battalion

Others speculated that it was another officer. I don’t know of any enlisted men who didn’t like LT Iorio. Some even suggested that he was hooking up with a female officer, and that she had another male companion who was jealous.

Whatever the situation, it’s hard to believe he opened his door and someone shot him.

Later in the day, there was talk of another HMMWV mission. SFC Grimes, from 4th platoon, came up to me and explained, “Hey, AB told me to get with you to get a gunner for one of my humvees.”

I didn’t think that sounded like something that AB would have agreed to, so I went to talk to him about it. Also, 4th platoon was our acting as reserve for this mission, and my platoon was to be the main effort. Why would I give them my machine gun and a soldier to carry it, especially when we are already short-handed. I should have had two M249 SAW (Squad Automatic Weapons), and at the time I only had one.

AB was pissed. “That’s bullshit,” he said. “I told him to get with you about your unassigned SAW. I didn’t say shit about you giving him a gunner to go with it.”

Figures, I thought. At least that scenario made a little more sense.

We heard more about the Stryker in a ditch drama today. I’m really hoping to get my hands on the photo of 1SG posing with it. I’ll have that shit printed, and if we have to see the battalion commander about Willy smiling in front of the vehicle, I might just hand him the picture of 1SG. t to him.

HMMWV MISSION IS A GO

Just kidding. Two minutes after AB opened our door and told us to get our shit on, he came back and told us the mission was cancelled.

Our door opened again, and AB said, “All NCOs report to the TOC.”

We went back over to battalion to wait for CSM Ordonio again, and he kept us waiting for what seemed like forever, again. Eventually, he came out to talk to us about the shooting, weapons clearing procedures, how to check our soldiers’ weapons, and how important it was for us to maintain accountability of our weapons.

“I hope this was attempted murder and not a negligent discharge,” he said.

Then, without actually saying it in these words, he implied that LT Iorio shot himself accidentally. He gave some details about the trajectory of the round, LT Iorio’s reaction time, and the holes in his story.

I like LT Iorio. He has always seemed like a good officer. He’s down to Earth, reasonable, and treats soldiers well. All in all, he has always seemed like a squared away leader and a decent guy. I left this lecture feeling like CSM Ordonio had just dragged LT Iorio’s name through the mud in front of every NCO in the battalion. I wish I could get in touch with the LT and let him know what is being said about him.

Because of this incident, we are now required to train everyone on proper clearing techniques for every weapon system. There is also some discussion about carrying all of our individually assigned weapon systems everywhere we go. At this point, I have an M4 Carbine and an M9 Beretta 9mm. I usually only carry the 9mm, but that may change. That sucks for the 240B gunners, or the guys who have an M4 and an M14 or a shotgun. These concerns over weapons accountability will only apply to the lowly enlisted men though. I don’t see any officers around HQ carrying extra weapons, and from what we’ve been told, it was one of their weapons that started all of this.

The story we finally got about the whole incident is this.

If that had been my weapon, or any other soldier’s weapon, there would have been hell to pay, just because it was missing. The JNN is reporting that battalion is conducting cover up operations, because it’s much easier to ruin a lieutenant’s career than a major’s. The frustrating thing on our end is that this entire incident involves officers who work at our battalion headquarters, yet we are the ones who who jumping through hoops and paying for it. Last time I checked, my soldiers have all of their shit, and they know how to clear their weapons and handle them safely.

Later in the morning, CSM Ordonio took us down to LT Iorio’s CHU so that we could see the blood splatters and chunks of flesh that were stuck on the wall. None of us could really figure out why we needed to be paraded through there, but the JNN came up with the idea that we were contaminating a crime scene. It worked well with their cover up story.

After stopping to look at the aftermath for a few seconds, CSM Ordonio said, “Now you’ve seen it. You can draw your own conclusions.”

Next, he watched each NCO demonstrate how to properly clear his weapons, and then we went to lunch. SFC AB told us during lunch that we needed to be at the company CP by 1400 hours (2 P.M.).

All of the NCOs from my platoon walked up to our company area about 1:45 P.M., and we were told to disregard. As we started to leave, SFC AB told Leo, Lloyd and I to get the platoon ready for tomorrow’s mission. He spent another 3 hours there, being briefed on the shooting incident.

It’s an interesting situation. Everyone has his own ideas and thoughts about what happened, but we’re being told to make sure our CHU doors are locked at all times, and that we need to find out who is knocking before we open the door for anyone. It’s really odd.

I was in the latrine this evening, and several soldiers were talking about the situation. In my best sergeant voice, I said, “What the fuck is wrong with you people? We’ve got soldiers wearing window-licker tabs, fleece watch caps, Strykers are getting stuck in the mud, and lieutenants are getting shot…”

Right as I finished saying that, CPT Veath stepped out of the shower. He busted up laughing and shook his head at me. I’m glad he’s pretty laid back most of the time.

Well, we were just called for another formation, so I’m out of here.